Broadlink now has quite a lot of integration options almost out of the box. If you enable Broadlink IHC, you can directly link it to Alexa by giving the device a unique name.

There is a homebridge plug in for homekit integration but I haven't tried or tested this. https://lprhodes.github.io/slate/

I wanted to put the device in domoticz so I can have more control over what can trigger my broadlink. I decided to use broadlink-mqtt for this, which is a fairly easy method to trigger from any source.

3. Update the mqtt.conf file with the device type set as multiple_lookup

4. Start the python script and check that it started and detected all the RM devices.

5. Record the IR command - substitute the 00_00_00 with the last 3 octets of the mac address for the device. (I haven't tried this yet, as I previously added my commands when I only had 1 RM mini)

If the MQTT IP address is 192.168.1.10, the following "On Action" can be used to turn on and off the broadlink virtual switch device created in Domoticz

My first pi is fully used and has hit production mode where it runs the house and I can't use it as a play toy anymore. It's running Jessie, which is super stable.

Guess to move on, I've got a 2nd pi which I've decided to put raspbian stretch and here are some notes of the install because it never really goes as planned.

After downloading and running raspi-config to region, etc. apt upgrade failed with hash sum mismatch using the default apt sources. I tried a few and what worked for me was:

after apt-get upgrade worked, I went on to install java. I had some issues as well with  "Error: missing `server' JVM at `/usr/lib/jvm/java-8-openjdk-armhf/jre/lib/arm/server/libjvm.so'." which was fixed with

Ok, moving on to some software, i prefer a manual installations since I can squeeze more stuff into the pi.

As I mostly use Domoticz, I've decided to muck around with home assistant this time and the installation went smoothly enough.
HomeAssistant - https://www.home-assistant.io/docs/installation/raspberry-pi/

Once everything is merged, the challenge will be to make sure all devices are reported to the correct status. There are 2 main stores of device state in my setup;

There shouldn't be 2 different master sources of data. As Domoticz seems to be the master controller and other devices, e.g. Philips hue is capable of updating the status in domoticz automatically and homebridge uses the domoticz plugin, I'm going with Domoticz as the master status and everything will just query domoticz for the state.

To do this, there need to be a virtual device for each appliance that will be have it's state reported. Domotics support all sorts of virtual device, the more common ones we will use is
The full list is located here. https://github.com/PatchworkBoy/homebridge-edomoticz. Most devices will use the standard sockets device, i.e. On or Off.

The "Ping test"  hardware devices that can be added to domoticz if you wish to check the status of the NAS or the TV or other ping-able device. Note that this does not apply to mobiles or iPhones which need a separate script to update the device status.

For devices that I think needed to be on all the time, I can add notifications to when the ping goes down, e.g. if your NAS was turned off instead rather than have an extra icon in Apple Home.

Once the devices are added to Domoticz, in Domoticz go to;

This will allow you to send a device state to a Fibaro label. It does not help update the global variable. You will need to create a Fibaro virtual device with a bunch of labels and name it correctly. These labels will be updated with the status of the Domoticz virtual device, e.g. On/Off.

This is probably the easiest way to be able back reporting if you prefer to use the Fibaro app which is much prettier than the domoticz app at this time. If you also like control buttons in Fibaro app, refer to the post on Fibaro virtual devices controlling Domoticz using HTTP commands.

Note, it's also possible to update Fibaro global variables where needed, this can't be done via FibaroLink, but should be easy enough to put into the On/Off action of the virtual device to call a script:/// to use the Fibaro API to update accordingly. I've not done this yet as so far, I haven't found a need for it.

As the Fibaro HCL does not support LUA. The question was how to update the number value of the slider to send to the HTTP string. Thanks to this site which is a really good reference https://www.vesternet.com/resources/application-notes/apnt-88/

The 2 use cases here are;

To allow for volume control for all Sonos devices, add a virtual device with the IP address for SONOS HTTP API and specify the default port to 5005. Create Slider and put the following text into the string.

Replace XX with the device ID.

Add the following weather accessory to the homebridge config.json

In the earlier post, I created a batch file to extract the temperature via REST API from Fibaro HCL to upload to a domo device. Not the most graceful way to do it, but it old school and works.

Another way, I just setup is using Node-red to keep pulling the temperature from the sensor and publishing it to domoticz/in topic to update the domoticz vitual device.

This is installed using https://www.npmjs.com/package/homebridge-mqtt-temperature This requires you to run mosquitto mqtt and node-red locally.

There's probably a few more things you can actually do with MQTT, so I've decided to move to MQTT instead and reduce the number of cron jobs.


The customised function will extract the TemperatureH value from the return JSON string and insert the domotics JSON format into domoticz/in topic for domoticz to update the virtual temperature device.

Again replace the XX with the Domoticz device ID.

Finally upgraded to a new Samsung 4K TV and iSamsungTV stopped working. The good thing is that so have most people and there is a new app, samsungctl https://github.com/Ape/samsungctl which  allows command line interface to the TV using websocket, because everyone needs a to open a terminal window to change a channel.

Basically I needed to


After the installation, I had some error messages, i.e. "AttributeError: 'numpy.ndarray' object has no attribute 'tobytes'", which was solved by;

The new TV can be turned on with WakeOnLAN now. This makes my Broadlink RM3 fairly redundant as the older Samsung wasn't able to turn on hence, I needed the IR blaster before.

Applying the same concept as the Aeotec Dimmer for Homekit control, we can also use the Domoticz virtual dimmer to control the Sonos using node-sonos-http-api.

I'm starting to derive a shorter version of the LUA script for easier maintenance and using the base On and Off action commands on Virtual Device configuration page. Replace the IP address with the raspberry pi running node-sonos-htttp-api.

Step 1. Create a temperature virtual device in Domoticz and take note of the device id.

Step 2. Create a bash file with the following script, replacing the XX and user:password fields.


Step 3. Create a cron entry to run this script every 5 or 10 mins (temperature doesn't change that quickly)

Maybe to put more context into the previous post of a slow build out of home automation components, here's a big picture integration diagram on how everything works together to date. 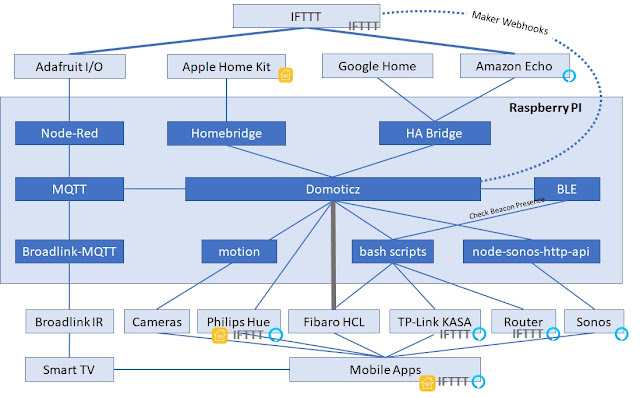 Assume that Homebridge, Domoticz and Fibaro is already setup. The homebridge config.json file should have a room reference to avoid Homekit showing all devices

Step 2. Add the virtual device to the Homebridge assigned Room "roomid" that is assigned for devices that Homekit will control.

Step 3: Create a new lua script file with the device name in this folder

The script name is important. For the device with the name "My_Dimmer". create the script "script_device_My_Dimmer.lua"

The whole path is as such.

Insert the following to the script file, replacing user:password and device IDs. Script as follows:

Important Note: name your dimmer My_Dimmer so that the name is consistent in the device and in the script for it to work.

One of the initial problems was that the light turning off will trigger the motion/light. the solution is to modify the 'lightswitch' parameter, which doesn't have a lot of references to what to set, so it's trial and error as each camera feed are always different..

Noted that I did first change the framerate to 20 prior for better quality. To tune the lightswitch setting, set yourself up around the time the motion light is supposed to come on and follow these 3 steps as a general guideline.

1) Set the event_gap to a small number for testing, e.g. 10 seconds so that you do not need to wait for a long time before testing the light changes and motion detection.

2) set some base parameters which make sense, 2 or 3 is ok for the 2 variables.

3) start playing around with the lightswitch value. to figure out how it works, set it to the max and min and see which one doesn't give a false positive. I started with 100 and 10 and played with everything inbetween until i realised that 10 worked best anyway for my hue light at the door.


Here's a guide to use an old network cctv feed as a motion sensor for lights.


Here's what we need

1. URL for jpg feed from the network camera

The URL varies for different brands and models.

Modify the /etc/motion/motion.conf file (Refer to the motion documentation)

I removed the following from the motion.conf create a new thread file for each video source

I also changed the webcontrol_port to 8000 as 8080 conflicts with the default domoticz port.

I added a thread file for each video source


The following is an example of a tread file called camera.conf. for each camera

The variables you need to replace are:

is the switch id of your light that you want.
Make sure that the steam_port is not already used on the pi and for each camera, to change the stream port.

If you want to have a bit more smarts for the motion sensor rather than having to keep turning on and off the motion process at night, create a Motion detection dummy virtual device on domoticz and replace that lightswitch id with the motion sensor.

It is possible to use the apple homekit/homebridge to add the virtual motion sensor to apple home and created an automation to set it for only turn on the light at night and when someone is home.