I'm wondering if anyone noticed Bob changing the words in Never Enough to "Singapore baby" instead of "Japanese baby".

I think the last time I watched the cure was in 1994 in Melbourne. This gig was I think longer if my foggy memory works and they played tons, making it real value for money at $60 bucks an hour for the $180 buck free standing tickets.

And jeez, I've never seen so many camera phones in action. Sometimes they were really irritating. Lest to say I took a picture too :P. But at least I didn't stick it someone's face to frame and zoom for 5 minutes. Here's how a quick 2 second lift and snap looks like. 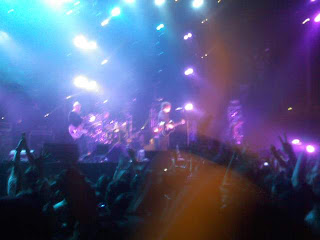