This is the second time I'm watching Jet, first somewhere in the Valley in Brisbane. Still as entertaining and not so full on. Quite a chilled out gig. If you watch them, drink lots of beer. 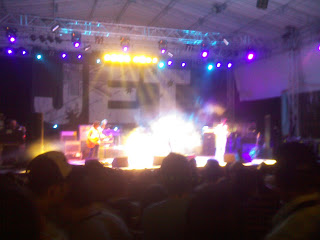 Well, I had the phone serviced and flashed the ROM with Windows Mobile 6 sometime after this shot was taken.
at July 25, 2007 No comments:

Recorded in Brisbane using my Korg N5 and computer sequencer. This features pictures taken of the National History Museum.


Naturally when I say recorded, I mean its written then as well. I just record whatever improvisation comes to mind at that time.
at July 17, 2007 No comments:

google desktop and pidgin to the rescue

My windows machine is now Vista.

Why? After the failed installation of Office 2007, installed as an upgrade from Office 2003, I was unable to create any more charts in Excel. Apparently there is no fix for this and no matter how many un-installations and installations of Office you do after that, or muck with the registry files, its not going to come back to life.

The solution, backup your data, reformat and install Vista. The vista performance index of my Dell Latitude D620 N series is 3. Although it is quite capable of running all the Aero stuff. that gave me a bit of a headache, so I set it to max performance and put all the classic features.

So far, the major downsides to Vista apart was with the live search (which of course doesn't find anything) and also live messenger. Coincidentally, both tools have the word Live in it, so maybe its the same bunch of people with another different installation of windows.

Anyways, not going to go through the whole hassle of another re-install, I decided to use 2 things that I know works. Google desktop to replace Live search and Pidgen (formally Gaim) for Messenger. At least Google desktop gives some responses rather than just hang on indexing and Pidgen does more than just MSN.

Although I expected massive compatibility issues, so far its been good, I'm using the 32 bit version. Oh, and yay, I can actually create an Excel chart now.
at July 15, 2007 No comments:

This is actually the name of a default patch on my pod xt live effects pedal. I was testing it out and recorded this while I was at it.

The photos were taken from a nature walk further down from the gold coast at Burleigh heads. For a nature walk, there was sure a lot of rescue craft about, lifeguards, boat and even a helicopter. Must be rather safe if the sharks don't get you first.